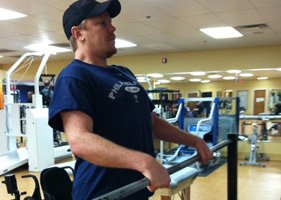 In June of 2010, a mountain-biking accident left David Wieselmann with a broken neck and a spinal cord injury at the C7 vertebra, leaving him paralyzed from the chest down.  Before this life-altering accident David was often seen biking 40 to 70 miles in a day around the Northeast Kingdom of Vermont, until the snow fell—then it was all about skiing.  Could he ski every day of the season?  Heck yeah!  And even extend the season by traveling out of state to chase the snow.  For David life has always been about movement and pushing his body to the limit.  Never one to sit around, he now ironically finds himself stuck in a wheelchair. Known as “Turbo” on the slopes, he longs for the type of vigorous activity, which earned him this infamous nickname.

Paralysis is not as simple as being unable to move body parts.  There are many major health risks involved such as osteoporosis, blood pressure problems, heart disease, muscle spasticity, and calcification of muscles, to name a few. As is the case for anybody with health issues, exercise is the remedy.  Of course paralysis makes a full body workout a huge challenge.  Because David’s spinal cord was crushed and damaged, information from his brain cannot travel through to let his lower body know it is expected to move. Because his muscles still have memory of being used to excess before the accident, David’s body is especially responsive to physical therapy. He has shown significant recovery through his therapy and dedication to his healing process.

David has been especially fortunate to be given full access to a cutting-edge spinal cord injury rehabilitation program called Journey Forward, located near Boston MA.  Thanks to friends, family, and community members, David has been able to raise the initial money needed for him to attend Journey Forward.  David has achieved incredible success in his therapy and is gradually re-gaining strength and sensations in his lower body. The road is long and painful to say the least, but David, along with the many other individuals we sponsor, has the heart and determination to undertake this journey.

We need to come together to raise the money for people like David. Every contribution, no matter the size, helps.

By donating to Walking With Anthony you are making a difference in peoples’ lives that is immeasurable and vital to their success.

David is just one of the thousands of individuals living with SCI.  Like David, they need your help.