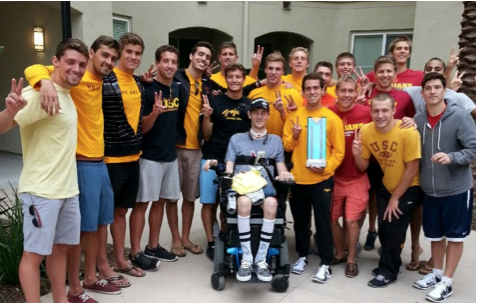 “We’re sending out a HUGE thanks to the Walking With Anthony Foundation for sponsoring Dillon so he can work out at Strides SCI “functional fitness” gym down in San Juan Capistrano.”

Like many fearless athletes, Dillon Connolly showed up to achieve his dreams, reached his goals and aspired to “next”. In 2007, Dillon attended USC on a swimming scholarship, where he became a school record holder, team captain, and All-American. He represented the USA on the 2006 National Junior team and competed at the 2008 Olympic Trials.

Dillon Connolly was preparing to train for the 2016 Olympic swimming trials when he dove into the surf off the Pacific Coast that fateful day. He had been living in Newport Beach and working at an Irvine aerospace company after earning an engineering degree from USC. Even though he was an avid body surfer, familiar with the waters, Dillon was unaware that recent storms had wreaked havoc on the ocean floor. As Dillon dove under a wave, he hit a sand bar shattering his C5 and C6 vertebrae. Dillon was left paralyzed and instantly became a quadriplegic.

Since receiving his diagnosis, Dillon’s mother has chronicled his courageous road to recovery in a blog on Caringbridge.org. With his “I can” positive attitude, he will not be stopped. Connolly’s story reads a new chapter since he recently left his daily treatment at Shepherd Center in Georgia to relocate back to Newport Beach. In an e-mail, Julia wrote, “He mentioned this morning that he would like to have an FES bike at home so that he can continue to keep his muscles toned. I know he would use it daily if he had one…they are very expensive and his health care plan does not cover this type of equipment. When I spoke to the rep, she quoted me $28,800.”

Walking With Anthony knows how difficult it is to overcome Dillon’s injury, as Anthony Purcell shared the same type. However, Anthony has made great strides over the last five years as shown by his most recent videos walking in his braces and rowing without hip support. We know the possibilities for Dillon. For now, we are able to help him get recovery at Strides SCI and he is making tremendous progress! Hang in there Dillon! You have an enormous support system. We know you can do this!!

If you would like to help further Dillon’s recovery and others like him, please donate below. Thank you for joining our mission!